In 1980, Dr. Hubbard moved to Portland from Canada to pursue a professional hockey career. He played three years with the Portland Winter Hawks. In 1981, he was drafted by the Minnesota North Stars of the National Hockey League (NHL). He ended up playing NHL games with the Calgary Flames and the Los Angeles Kings and went on to play professional hockey in Illinois, Michigan, and Wisconsin. A knee injury ended his career in 1987.

After his graduation from Western States Chiropractic College (WSCC) in 1994, Dr. Hubbard opened his first practice in Tigard, OR and pursued a formal education career teaching at WSCC.

Dr. Hubbard closed his practice in 1999 and returned to hockey when he took coaching positions in Eugene, OR and Great Falls, MT. He had been coaching kid’s hockey since 1988 and was offered a coaching position at a higher level which was Eugene. Dr. Hubbard was part of USA Hockey and travelled annually to St. Cloud, MN to coach Pacific District (elite players from Alaska, Washington, Oregon, California, Hawaii, Idaho, and Nevada) in a National Tournament.

Following the birth of his son in 2002, Dr. Hubbard chose to stay home and resumed his chiropractic practice as Director of Technical Service with an established clinic in the historic Sellwood area of Portland.

Five years later, he opened Total Health Wellness Center (THWC) with a vision of providing a facility where patients receive excellent chiropractic, acupuncture, and massage therapy. Statement from Dr. Hubbard: “I believe that the patients, who receive care from any of the providers at THWC, will receive exceptional care.” 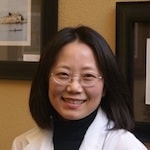 Her practice provides a holistic, preventative medical approach. Through a combination of acupuncture, herbology, dieting, and nutrition, her treatments help to strengthen patients by enhancing the body’s self-healing abilities. From her medical experience, Dr. Yu believes that successful and sustainable patient treatment can be achieved through natural methods. Her passion stems from helping patients reach their health goals specifically in promoting vitality, sustaining health, boosting immune systems, and maintaining optimal physical harmony.